I think my inner nerd has finally taken full control of me.

I recently started playing Dungeons & Dragons (4th Edition) after listening to the podcasts Penny Arcade did at Wizards of the Coast (who publish D&D). I’m DMing the Keep on the Shadowfell campaign for a bunch of other new players. We’re all thoroughly enjoying it. And yes, that makes us all thoroughly nerdy.

I don’t have very many miniatures, which is a problem because 4th Edition relies heavily on moving characters and monsters around on a grid during combat. There are many alternatives (such as Lego men, dice, or other small objects), but I wanted something a little slicker. I wanted my game pieces to have a uniform look and feel, and not break the immersion by forcing the players to think too much about what each item represented:

I had a look round online for ideas for replacements, and found several people had made their own tokens using images found around the web. To be honest I was disappointed by these, as they were usually mismatched and of dubious quality. I needed a better solution.

This is how I came to design my own tokens to use in place of miniatures for D&D. I spent some time learning how to use Inkscape (which is an excellent piece of software, btw) and came up with some generic token designs that can be adapted to represent many different monsters. Here are some samples: 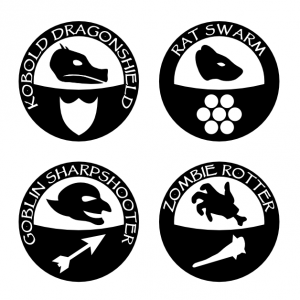 The basic design is this: The monster’s name is printed round the edge of the token, their race is represented by the upper icon, and the monster’s role is the lower icon. The roles in the sample are (clockwise from top left) Soldier, Swarm, Minion and Artillery.

Interestingly, some experienced players I’ve recieved feedback from already have said that I’m providing too much information to players by putting the monster names and roles on the tokens. I would definitely like to hear from anyone who plays D&D or other role playing games what they think about this.

Once I have finished running my current campaign, I plan on putting together a pdf with all the tokens in and releasing it under a Creative Commons license. This would just be a first stage, however. Eventually, I want to have an online generation wizard that allows people to create their own tokens from the templates, put them in a pdf and print them for their own use. This may take some time, as I have no idea how to programatically create/edit svg files. Cross your fingers, and maybe a few months down the line you’ll see something along these lines appear.