The Flying Developer Eats His Own Dogfood

There’s a term in the software industry called ‘Dogfooding’, or “To eat one’s own Dogfood”. It refers to the practice of using the products you develop. The term was coined in 1988 when:

I’ve been at Shopify for the better part of a year now, so I thought it was about time that I engaged in some dogfooding of my own. The result has just gone live: The Noble Pony

Giving Myself a Crash Course In E-Commerce

Setting this up was a bit trickier than if I worked at, say, Facebook. Shopify is not a service unto itself, but rather an tool that forms part of a much larger chain: running an online shop. Before I even signed up for a Shopify account I needed several things:

After considering some alternatives I decided that I would sell T-shirts with my own designs on them. This was because all the creative work could be done by one person (me) at my computer using free software (Inkscape). I could then take the designs I came up with to a local printer who would handle the manufacturing. As for an audience, I was primarily designing for myself. However, I knew that I would have to publicize my products somehow and so picked interests of mine that had strong communities I thought I could market to.

My business and funding plan are very closely linked. Due to the way T-shirts are printed, it only makes sense to order them in bulk. Economies of scale and all that. Putting my own money up to fund an initial printing run would be too risky, so I’m running the shop on a pre-order basis: People promise to pay for shirts, and if enough people are interested then I do the print run and ship the shirts. If not, oh well. I cancel the orders and no-one loses out (except my hopes and dreams of striking it rich).

Getting Set Up With Shopify

Once I had a design for a shirt, investigated the production costs, and decided on the business plan I got to work and set up The Noble Pony, my very own Shopify shop. The actual mechanics of doing this I’ll cover another time, but the main elements I needed were:

I went as bare-bones as possible by tweaking a Shopify theme called Solo for the storefront and setting up PayPal Express Checkout for my payment processor. I’ll be handling the fulfillment side of things myself so I did some research into Canada Post rates and set a couple of weight-based flat rates accordingly. The shipping setup was the hardest part by far as I initially went through the process of setting up an account with UPS only to find out that shipping really small/light packages with them was way too expensive (Shipping the shirts would have cost more than the shirts themselves).

So what have I actually created? I threw around a couple of ideas about Reddit-related shirts as well as Starcraft-related shirts. Then I played with Inkscape until I finally came up with this:

If you’ve ever played Starcraft 2 you’ll recognize this instantly: It’s a group of the battle.net league icons. There’s a little more to it than that though. The shirt itself looks like this: 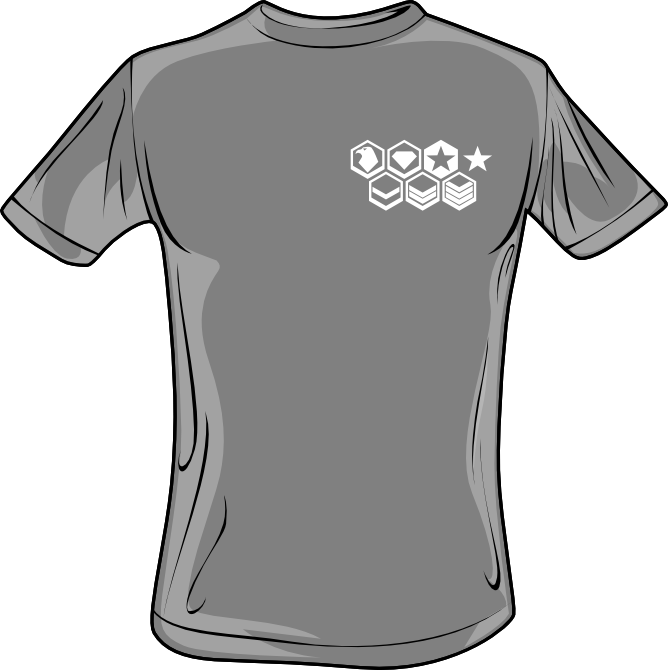 The design is supposed to mimic the way a soldier wears his or her medals or ribbon bar. Plus I think it looks cool.

My goal is to have 100 pre-orders by the end of January. Since opening the shop and announcing it on /r/starcraft two days ago I’ve pre-sold a grand total of… 2 shirts. Clearly the age of ‘If they build it, they will come’ is long over. My next task (and the subject of my next blog post) is to learn as much as I can about publicity and advertising and sell the hell out of the shirts. I’ll report back with my findings.

Note: Mad props to ~JovDaRipper for creating the brilliant T-shirt templates. Go check out his gallery on DeviantArt.