One Week of Omnivore 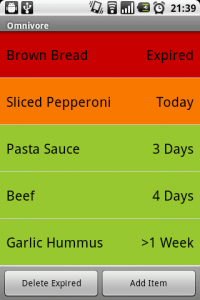 Seven days ago I released my first Android app: Omnivore. The process has been a huge experiment for me as I’ve never done a public product release on this scale before. I had no idea how many people would download it, if they would click the ads in the app and what comments they would have.

So far I’m very pleased with the state of things. At the time of writing Omnivore has been downloaded 40 times, 36 of which are ‘active installs’. Heaven knows what that means. The comments and ratings left on the market page are all extremely positive, which means a lot to me as I spent a long time making sure everything worked and trying to test everything I could think of. The response in the other areas that I’ve been promoting Omnivore (namely Twitter and Reddit) has been fantastic too.

The ad performance has been less encouraging. I only received a single click-through all week. I think that the problem Omnivore has with regard to ad space is that it is only actively used once or twice a week when shopping. No-one wants to click ads when they’re busy doing groceries, there’s no time. That said I only have a week’s worth of data and this poor performance may change if/when my fill rate goes up (amongst other factors). Even so I’m definitely considering dropping ads altogether in favour of a different revenue scheme.

Omnivore is far from being finished. Over the last week I’ve been experimenting with adding barcode scanning functionality as an alternate input method. The feedback I’ve received suggests this is a highly desirable feature. One of my main goals is to streamline the input process as much as possible and so if I can implement a barcode lookup feature that I’m happy with then I’ll definitely put it in.

The other, more basic feature I’ve been working on is auto-complete. Much like a browser saves what you write into forms on the web, I want Omnivore to save food item names that you’ve previously entered. In addition, I’d like to order the suggestions based on the frequency with which they appear in the calendar. These are both straightforward things to do with a single database table, so I hope to have an update ready for release by Monday.

Overall I’m extremely pleased with how the release of my first app has gone, and I’m looking forward to adding new features and having more people using it. I’ve also got some ideas knocking around for a companion app to complement the Omnivore functionality, but that’s a post for another day.